Our beaches have become playgrounds and toilets for unleashed dogs turning a treasure for all into an exclusive domain for a  few.

A dog owner, wearing a jacket bearing a State Parks Volunteer badge, entered CLB near the toilet area.  She walked 200 feet onto the beach and released her Dachshund.  He immediately ran to a family with a toddler, 100 feet away. The dog, George, would not respond to his owner's call. She eventually got to him, putting him back on his leash.

Then she went back onto the beach and released George again, in the same spot she released him the first time. He raced away and out on to East Cliff Drive!  She hustled over to retrieve George for a second time.  When she returned to the spot where she had already released George twice, she released him again. This time George ran after a group of people with two large off-leash dogs that were leaving the beach near 23rd.  George caught up to them and started to play with the dogs. For the third time George's owner had to retrieve and leash him.  She returned to the spot where she had already released George three times and then released him a fourth time.  This time, the two dogs that had almost left the beach ran back towards George and met him half way. She finally gave up and took George back to her car.

Apparently neither of the dog owners in this story feel they have to abide by the leash law, which is posted for this beach. 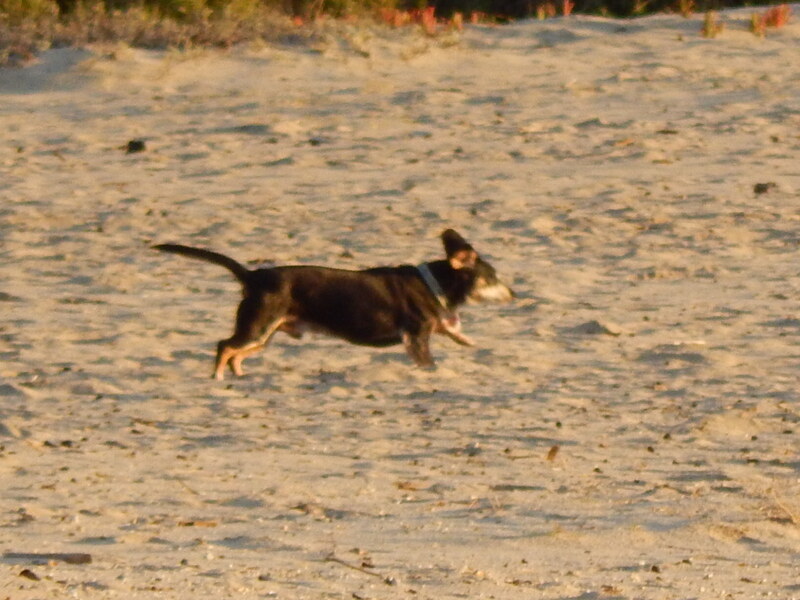 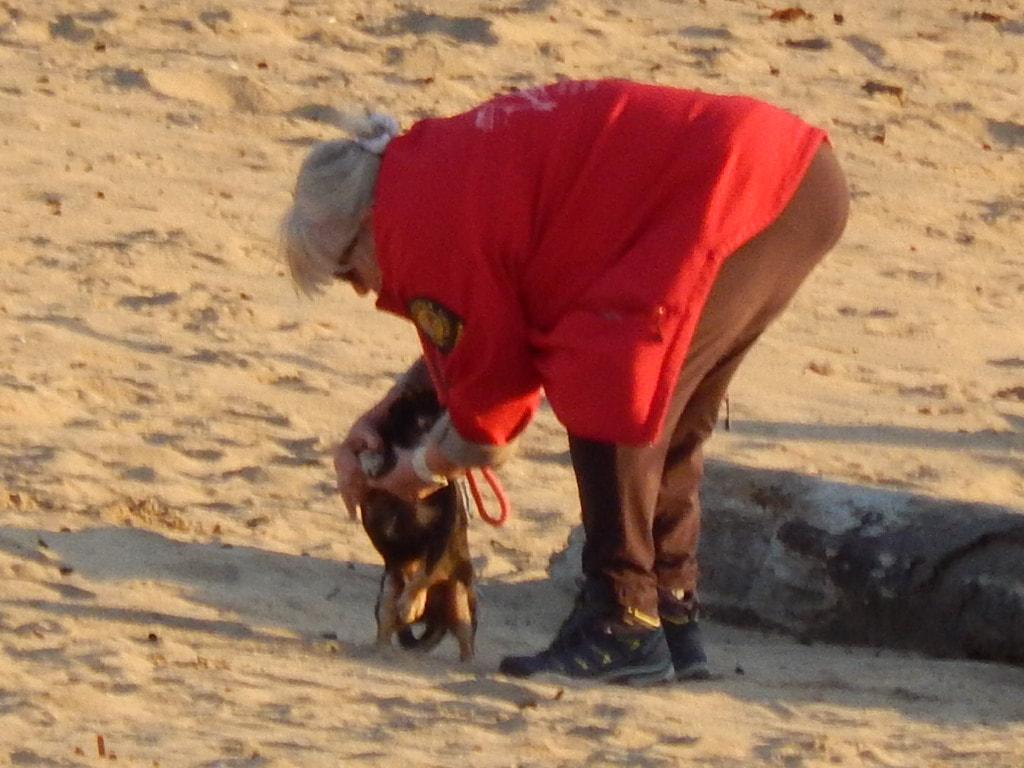 At 7:00 pm there were seven dogs on the beach ... all of them off-leash. Previously a dog owner mentioned that he goes there at 7 instead of 5 because he doesn't expect Animal Services officers to be there that late.

There's a man that sits far from the surf line close to the roadway practically every day. I asked him why he doesn't sit out closer to the ocean. His answer was "Dogs." Says it all.

At Pleasure Point beach area today, an unleashed dog, whose owner was at least 30 - 40 yards away from the dog, continuously harassed this sea lion pup. 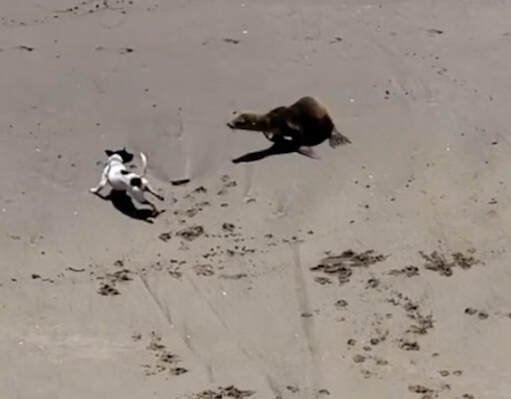 Sea Lion Pup on Beach: A Report by an Observer

"I was talking to a couple at the 23rd Avenue rip rap. A dog owner who chronically violates the leash law (Kris Davis) came by at 9:28 am with her two unleashed dogs. One minute later the woman I was talking to spotted the Sea Lion pup. They were the only two off leash dogs to pass near by, because I spent 3-1/2 hours asking dog owners to leash up and all passersby to walk up near the rip rap so the pup wouldn't be spooked back into the water. Thanks to the efforts of an Animal Services officer only 6 unleashed dogs managed to be a problem for the sea lion. The animal knew what a dog was because every time it saw one it would move towards the water; not where it wanted to be because every time a wave came near it the pup moved higher up the beach. When the Marine Mammal Center rescuers arrived they thought the pup might be dead. I told them it was only sleeping. They found out how much life was left in it when they netted it." 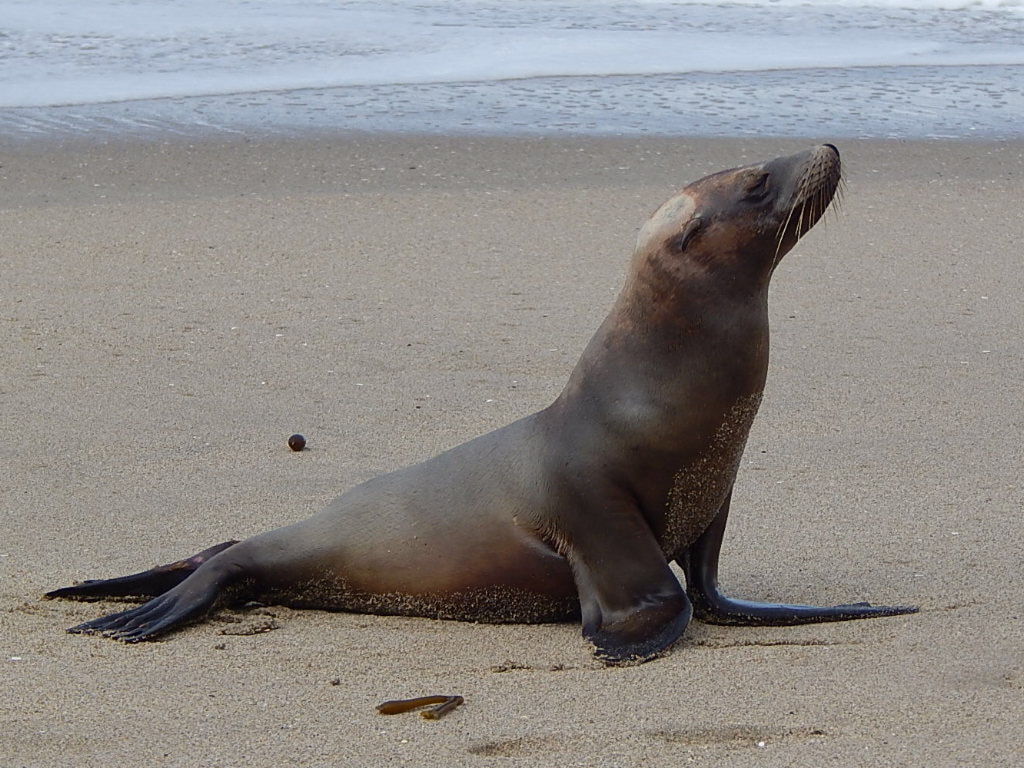 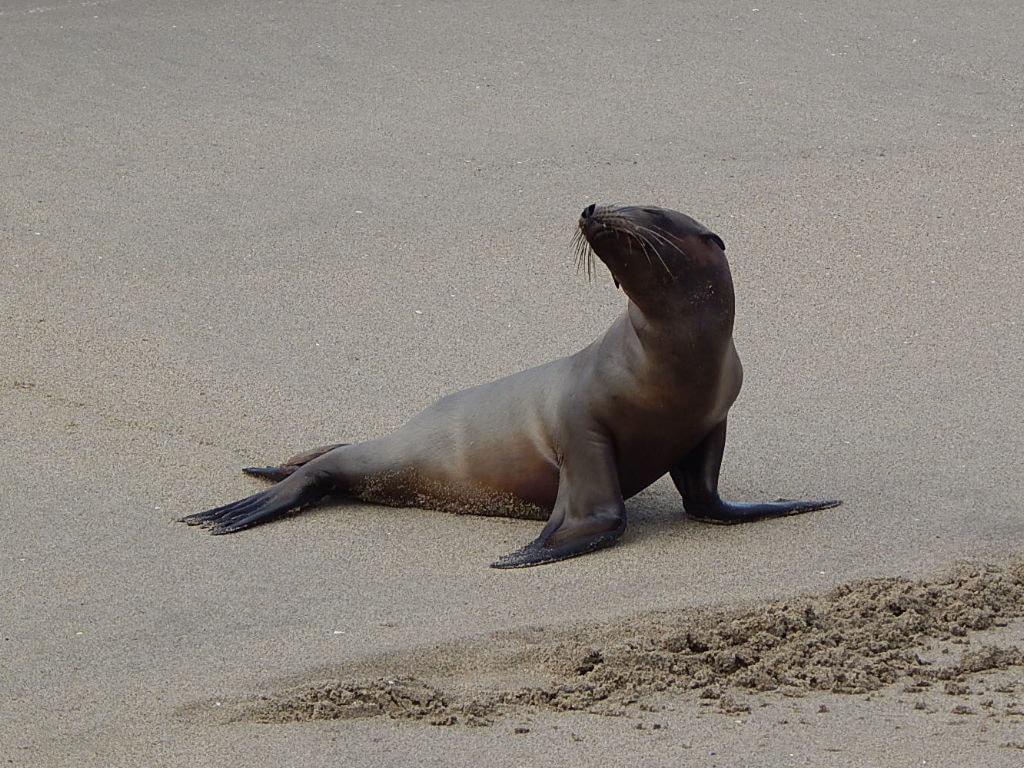 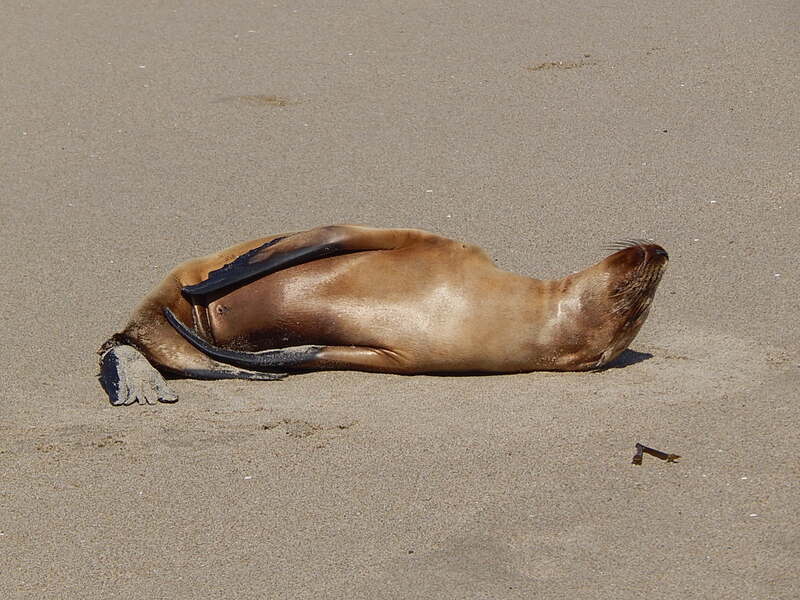 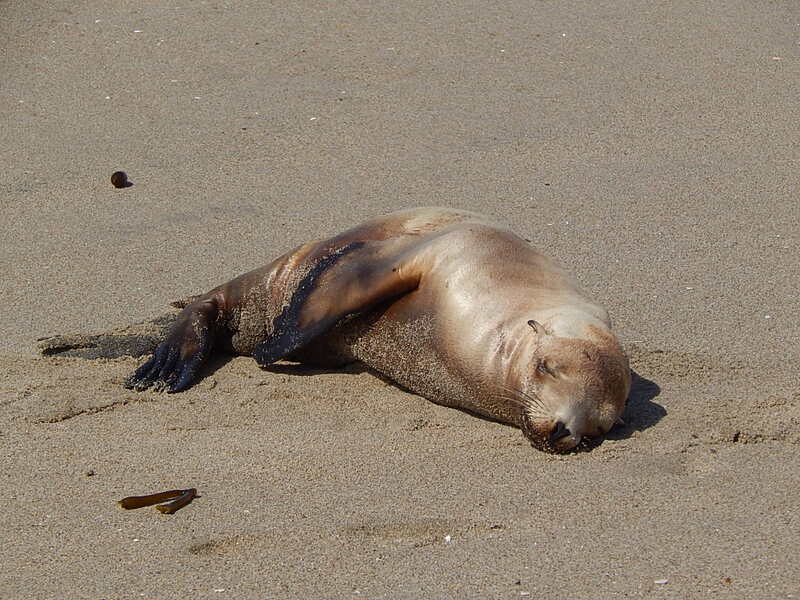 Update May 24:   This sea lion pup, recovering at the Marine Mammal Center has been named Lagoon. How fitting for an animal rescued from Corcoran Lagoon Beach (CLB). Another sea lion was rescued from the beach further east of CLB ten days later, on May 23.

Report from an observer:

The owner was ticketed (see officer at far left of picture). One dog owner was not ticketed because no one claimed ownership of the German Shepherd. That dog was carefully taken into custody of the officer. After the dog was in the Doggie Wagon, a young surfer came running across the beach. The officer asked him old he was. The boy replied eleven. The officer returned the dog to the boy and issued him a citation. 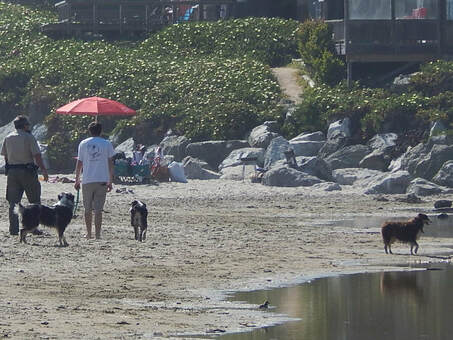 7:10 pm  --  The officer departed the bottom of 26th. Minutes later an owner whose dogs is always off-leash on the beach came up the stairs from the beach to E. Cliff Dr. I hope that he got a ticket, because when high tide covers the beach he hurls a ball along the 100 block of 26th Avenue for the dog to chase. I informed the officer about the fisherman with three off-leash dogs. The officer will write him a letter of warning.

I was standing over near the recently fledged killdeer chicks when I was suddenly confronted by a pit bull, who was barking at me eighteen inches away from me. I didn't know what to do.

I considered kicking the dog in the head, but I didn't want to because I've never hurt an animal and decided it would only escalate the situation. After putting up with it for what seemed ages, I turned and saw the owner 150 feet away enjoying the shoreline. I yelled to him, telling him to call his dog. Fortunately, the dog responded to his owner.

I did get this picture of the pair as they walked away and will report the incident to AS.

My fingers were still tingling 20 minutes after the incident and when I returned to my bike I had a problem remembering the code on my bike lock. 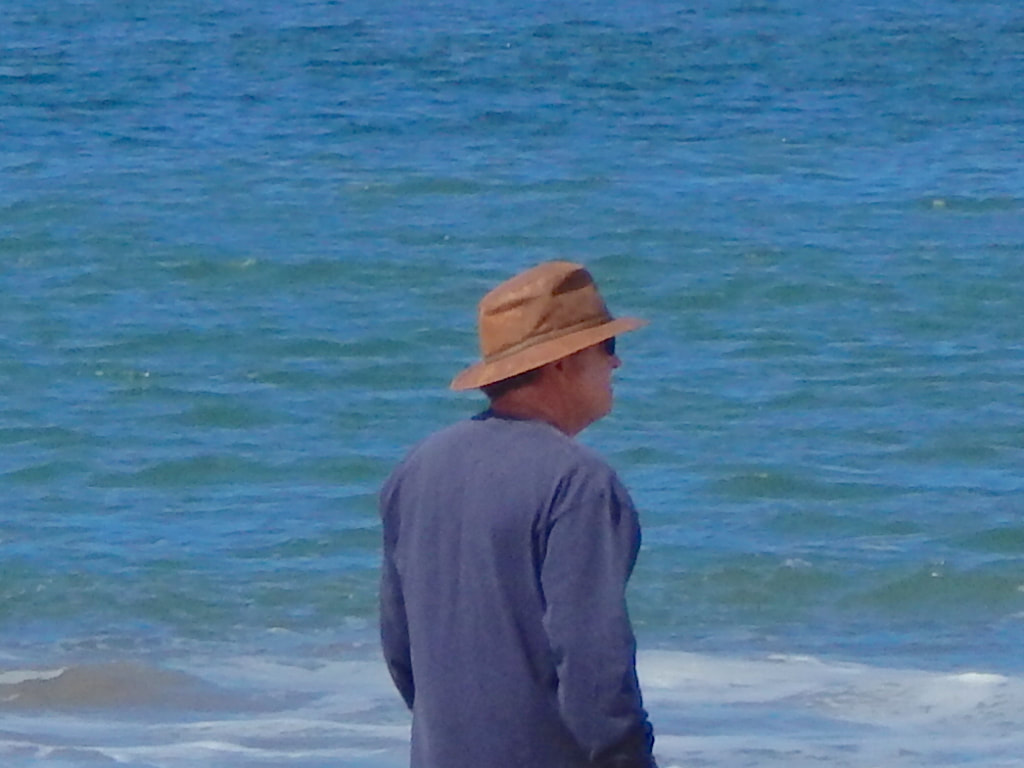 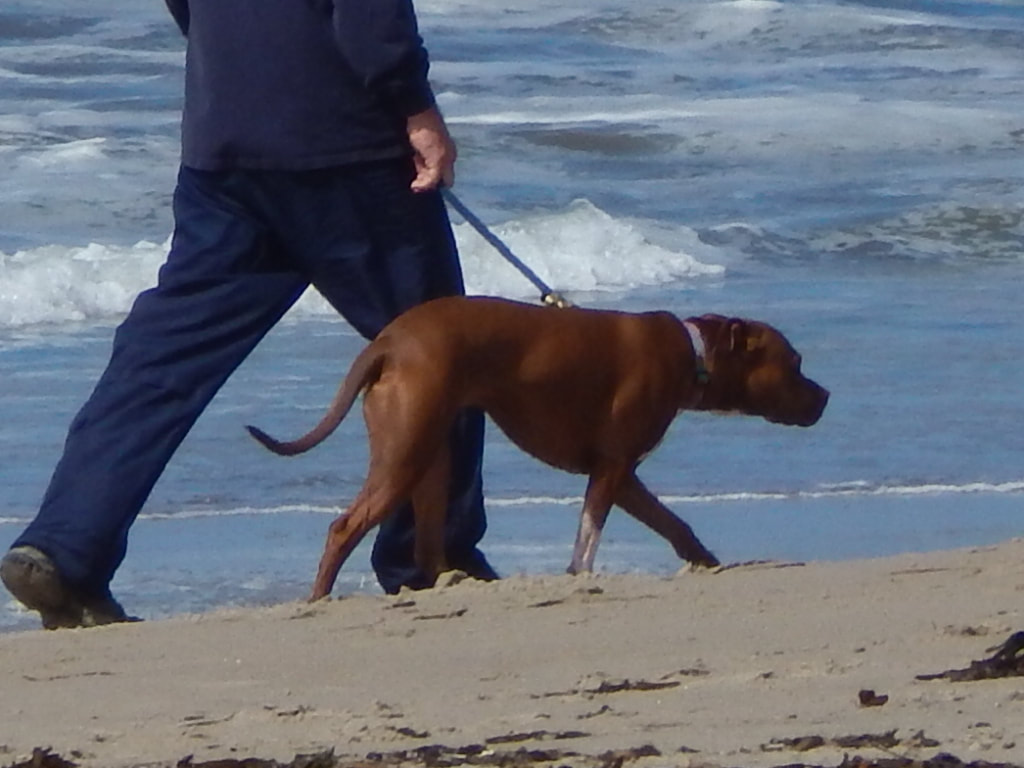 Animal Services has recently initiated a zero tolerance policy with regard to unleashed dogs in County parks and beaches. Good for them!

Here's a 4:30 observation of that policy in force at Corcoran Lagoon Beach:
​
"An Animal Services officer came on Corcoran Lagoon Beach at 4:30 pm. He immediately wrote two tickets. Then he saw another off leash dog and took off at high speed and ticketed the owner. I congratulated him on his speed. He said that one woman saw him coming and got away. Then I showed him the baby killdeer, at risk from unleashed dogs.

"I told him the best hours to come down to CLB and that there is a problem with large off leash dogs at sunset preventing people with children using that part of the beach. He said that he would try to get down there."

After years of warnings and hearing excuses, we're pleased to report that County Animal Services officers now have a zero tolerance policy and will issue citations without warnings. This officer issued three citations in the last 10 minutes of his field check.

This owner was throwing a ball into the lagoon for her dog, totally unaware that an AS officer was ticketing two people behind her. Then she turned around and threw the ball across the beach as the officer approached her. She received a citation. 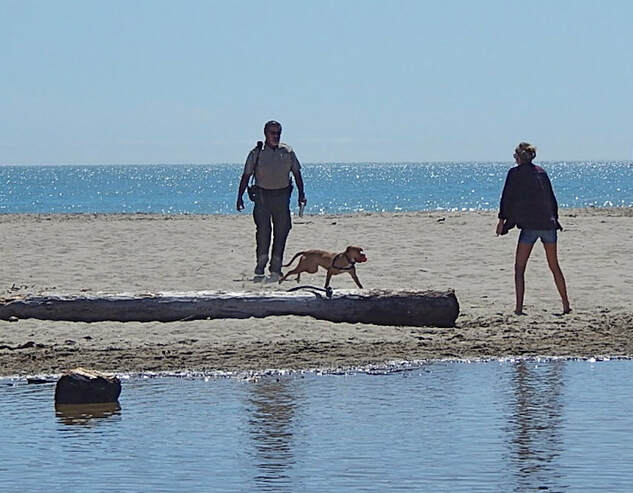 One owner, five dogs, none leashed. On the sand and along the watery shoreline.

Some times you just have to wait for them

Today at 11.40 am an Animal Services officer visited Corcoran Lagoon Beach. He sat on a log near the east end of the beach ... and waited. A few minutes later a dog owner showed up with an off leash dog. While the officer was engaged with the first dog owner, a woman entered the beach with a dog and quickly turned around and departed as soon she saw him. 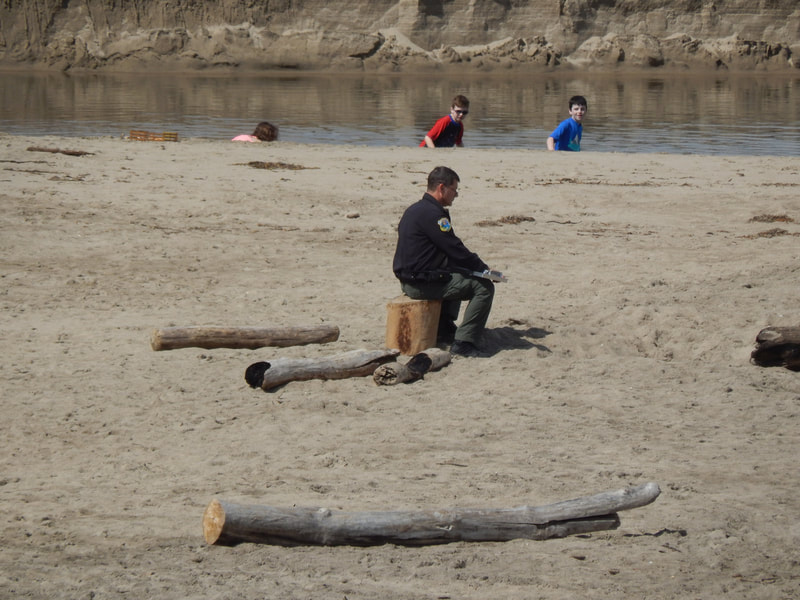 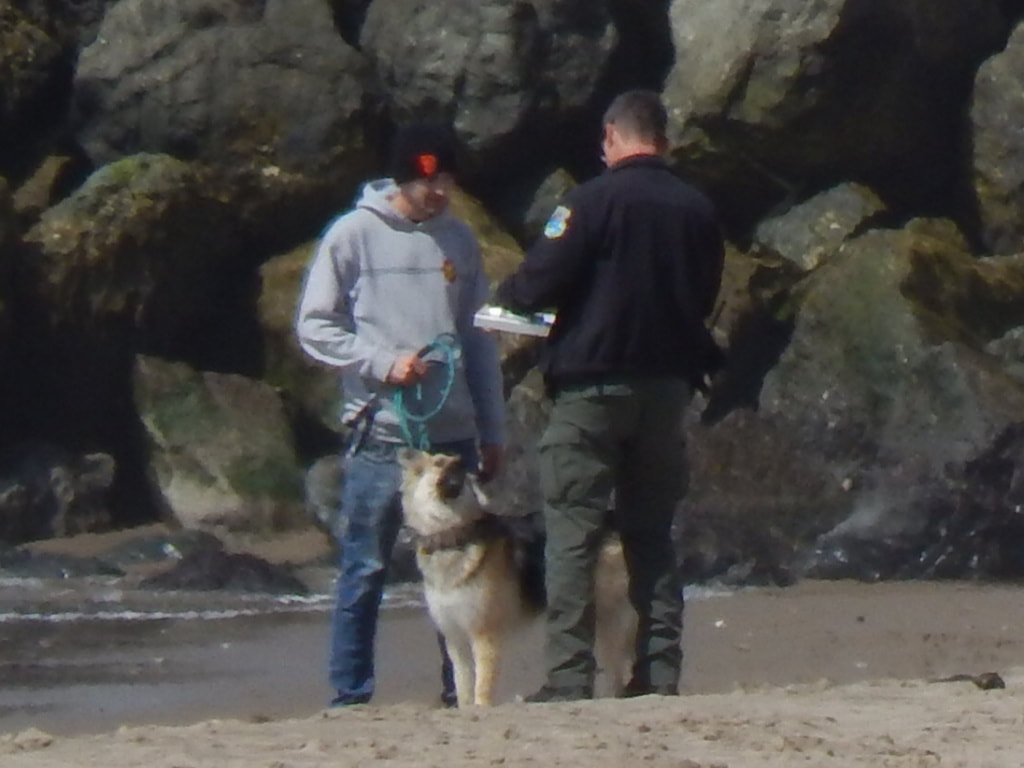 Apparently the plan is for AS to patrol up to 8 pm this summer. Nice.

A dog owner who caused Egrets to fly, disturbed as she threw a frisbee for her dog, saw an Animal Services (AS) officer approach as she was leaving the beach. She immediately leashed her dog. Her story was that a local group says that this is an off leash beach. If it was so okay, why did she quickly leash her dog as the officer approached?

The officer then spotted a couple with two off leash dogs out on the beach and took off after them. The gap between the pursued and pursuer increased because they kept increasing their pace. He never caught up to them, but was able to get their license plate number on 20th. A visit at their home would be nice.

Apparently AS is going after surfers who think it is okay to leave their dogs on the beach while they surf.

Little by little, the public is learning that being off-leash at the beach is neither okay nor legal. 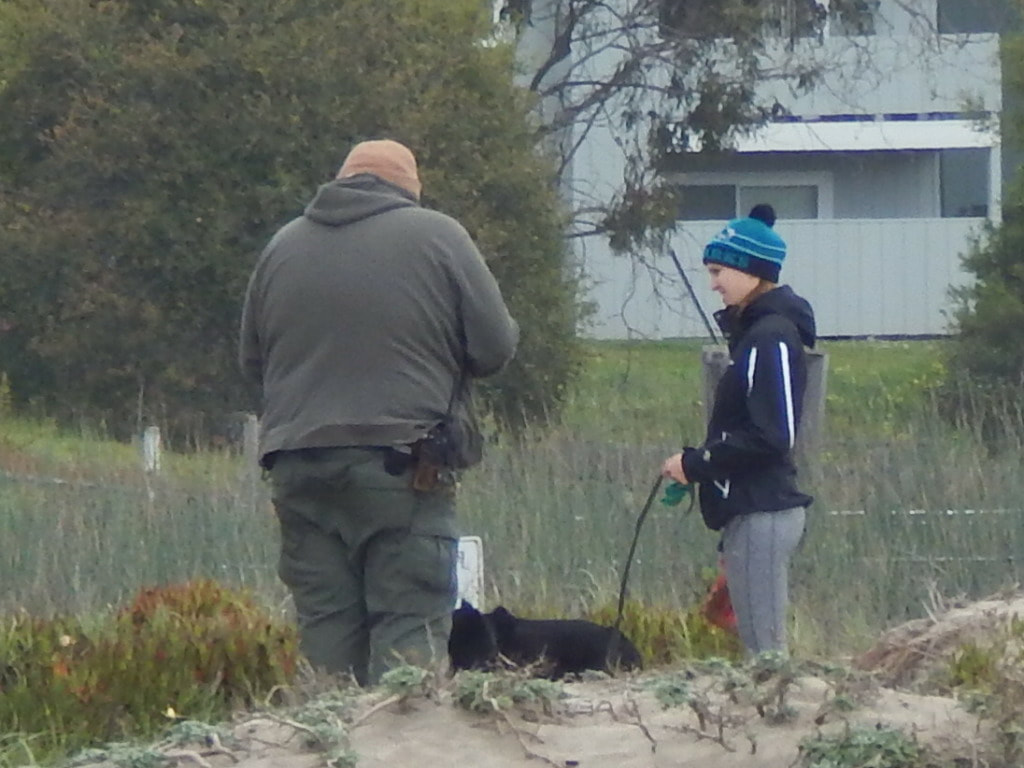 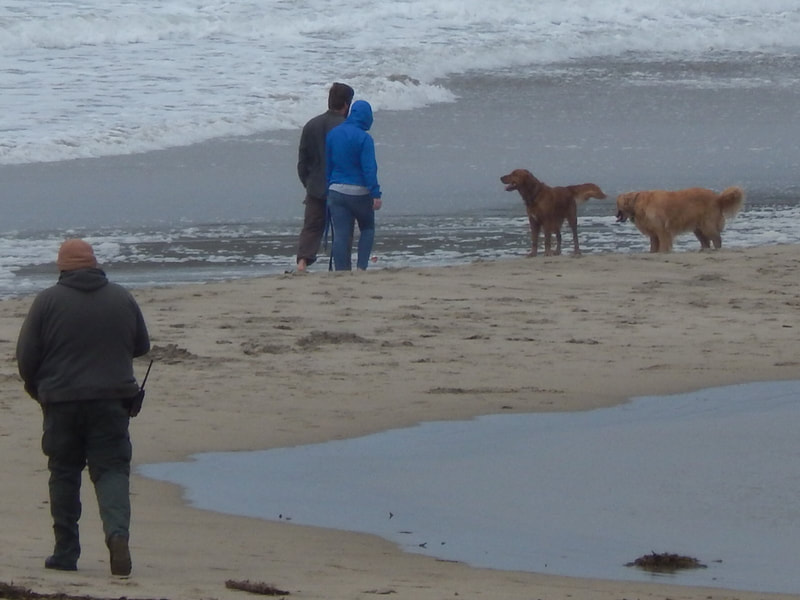 Corcoran Lagoon Beach at 9:55 am

At noon, two dogs ran off the beach and into the Inner Lagoon. Both were almost hit running between two cars that were traveling in opposite directions.  They missed both cars by less than five feet.  One dog, a large black dog similar in features to a German Shepherd recrossed the road through traffic, possibly in response to it's owner's call. Both owners were out on the beach close to the rip rap at the end of 23rd. The other dog continued in to the inner lagoon and chased birds. It literally covered all the territory between East Cliff and the library.